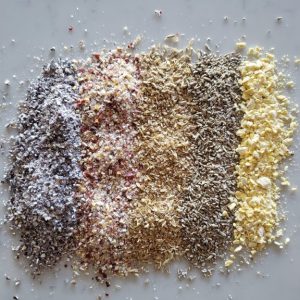 Before prohibition and then the ubiquitous rise of easier-to-grow corn varieties in the 1950’s, the landscape of American diets and spirits involved many different types of corn.  Today 99% of all corn grown in america is yellow dent #2 – almost every bourbon is made from this one type and every other corn variety has vanished.  But the old varieties have more protein and unique character vs. yellow dent.  Like different grape varietals in the wine world, these different corn species have the potential for different flavors in bourbon and there has been a resurgence of old corn species spurned by dedicated farmers and small craft American whiskey makers.

Our Bourbon is made from non-GMO Bloody Butcher and Hopi Blue corn grown in California’s central valley.  The Bloody Butcher gives the spirit spicy notes of buckwheat, chili peppers, and sweet cherry, while the Hopi Blue adds a lot of rich and earthy flavors.  Malted barley, rye, and non-GMO yellow corn are mixed into the blend to round out the spirit and naturally start the enzymatic reaction to produce fermentable sugar.  After distillation, the whiskey is aged in new, heavy char American oak barrels.

It’s more tough to make whiskey from these heirloom corns vs. yellow dent, but the result is a more interesting and dry bourbon with a wonderfully full texture and flavors of fruits and spices.